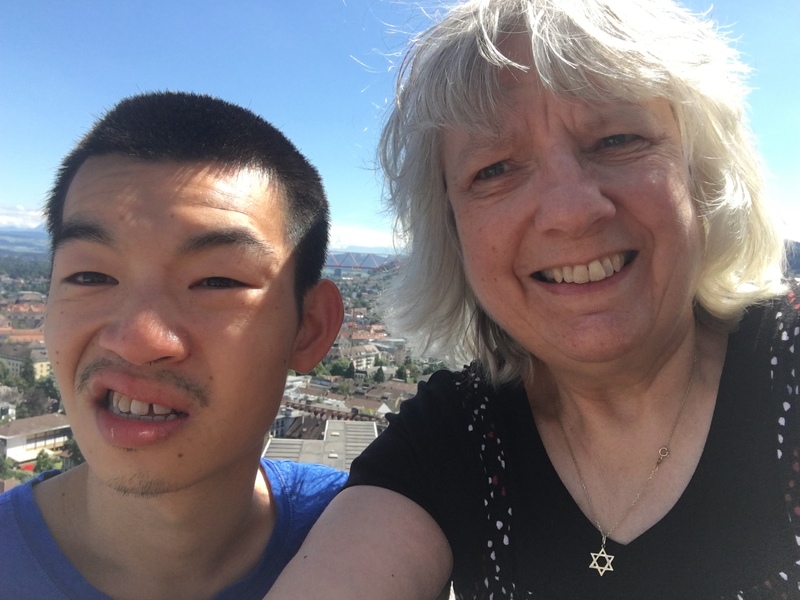 I am the adoptive mother of a Chinese son and I worked for a decade in Hunan Province as a volunteer with a Christian NGO.

In early 2016, a Chinese adoptee living in the United States contacted me. From 1999-2000, she lived in the center where I lived and worked. I actually knew her from 1997 onwards because I worked in the state orphanage prior to opening our second center I am so pleased to be in touch with this adoptee again. I feel blessed that she shares part of her life with me – that we can be friends. She is now a college student living in the United States. She introduced me to Our China Stories.

I would like to share part of my own China story because the ten years I spent living in China and working in an orphanage are very precious to me. This experience impacted my life greatly. I was able to heal inside and to slowly mature. I went to China because I thought the children there would need me and I wanted to do great things. I did help them, I know, but I also needed the Chinese people, and especially the orphans we cared for and their caregivers, much more than they needed me. I am very grateful I was given these years of living and working in China! In sharing my story I am hoping to maybe find some of “my” children, the children I cared for who have been adopted abroad. It would be amazing to get in touch again and share a little bit from our life with each other. I have chosen not to publish my name or the name of the organization I worked with so that I can speak as frankly as possible in my oral history.  If you are an adoptee from Hunan Province and you are reading this story, please contact Jena Heath, creator of Our China Stories, and she will connect us. You can email her at jenaheath@gmail.com.

I am from Switzerland and residing in Switzerland now. I lived in China from 1995 – 2005 and was part of a NGO building up a ministry in Hunan Province. We were invited to open a rehabilitation center for orphans with impairments and to offer training modules for local orphanage workers. At the beginning, we cared for 30 children and young people (school age). Over the years we were able to expand our commitment and opened a second center for children with impairments (age 0 to 7). It was amazing to be able to watch and also to be part of the process, to see how inactive and depressed children developed happy personalities and talents and abilities. I am remembering one girl with severe cerebral palsy who has been lying in a cot for seven years of her life. She had been fed with a bottle. She could hardly move and didn’t know to grip anything with her hands. She was not able to talk – and at the beginning would flinch back, when you wanted to touch her. Once the girl started living in our center and got all the support she needed, she learned to move her body, to grip things, to play and she started smiling. At the beginning she parroted every word. She has developed into a happy young lady who is able to take care of herself. She moves around in an electric wheelchair and has achieved computer skills. She is now typing the Chinese reports for the sponsorship program of the organization. She is actually trying to find work in the first work market. That is just one example.

The NGO cared for more than 100 children. Now, the NGO cares for mostly young adults, supporting some of them to live independently. Others live in group homes and work in sheltered workshops. The organization has also encouraged a foster care program for some of the children. But it was just not the season in that city.  It was hard to place children with impairments in foster families. The Community Outreach Program (built up by the NGO) is supporting families who have decided to keep their children with impairments at home. The program provides schooling or supports children to get into local schools. They provide medical advice and therapy and support the building of self-support groups for the families; all this with the goal to keep families together and to prevent abandonment.

The NGO has since opened two more projects in other cities in China.

While working in China a little boy was laid on my heart to adopt him. I was able to start fostering him in my home from 1999 onwards. The adoption was only completed in spring 2004. He has mild cerebral palsy and a middle severe intellectual impairment. In 2005 we moved back to Switzerland for good. My son attended special ed school. He is now 21. He moved into a sheltered group home in February 2016 and is working in a sheltered environment. He was ready for this step when the place opened up for him. He loves to come home for weekends and holidays. I am retired now.  I am enjoying to keep up fellowship with people, nurse those contacts and to be available for anybody who needs support. 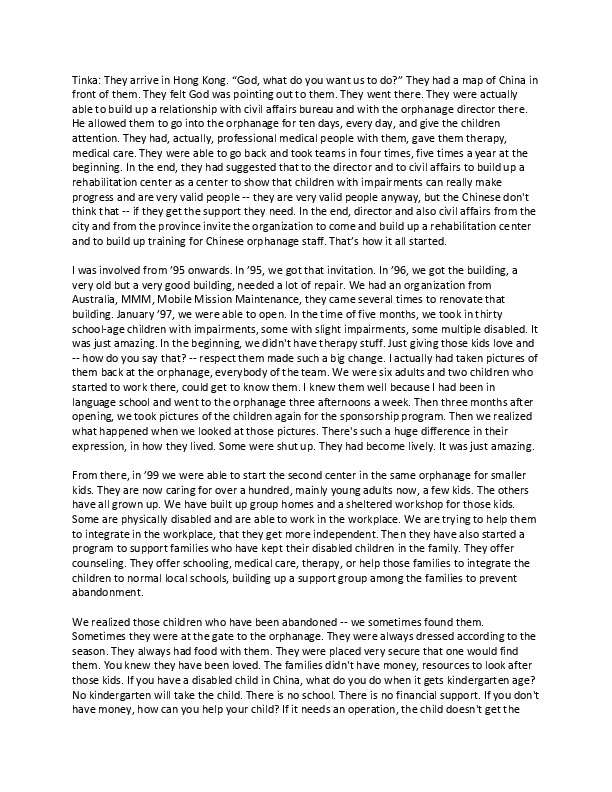