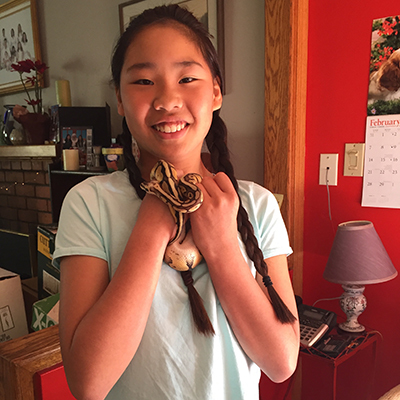 Camille, 13, was 9 months old when she came home from Fuling.

`I don't remember anything. All I know is from some pictures and from what my parents told me,` Camille says.

The family celebrates Chinese New Year and Camille did lion dancing for a year. She said she quit to fulfill her wish to learn horseback riding.  She took Mandarin for awhile, too. Now she is studying Spanish.

She knows two other Chinese adoptees in her northern California community. Her older sister, Grace, 18, has formed lots of friendships with other Asian kids. Grace's boyfriend, James, is also Chinese. Camille says that having an older sister has helped her absorb the frequent questions other kids ask about being Chinese and being adopted. Both sisters have done some Irish step dancing and both have done track and field, Camille says.

She says that other kids' questions about being adopted from China, `kind of made me feel special...It was kind of cool to be like, I come from here AND here.`

Asked if there is anything she would like other kids to know about being adopted and/or being Chinese, Camille says:

`Well I've had a lot of questions asked and I kind of know how to answer to them when they ask. Probably one of the most common is 'Are they your real parents....?' The other one would probably be 'Why would they give you up for adoption....' You get so many questions like that when you're growing up, you kind of know how to handle them and they kind of just roll off.` 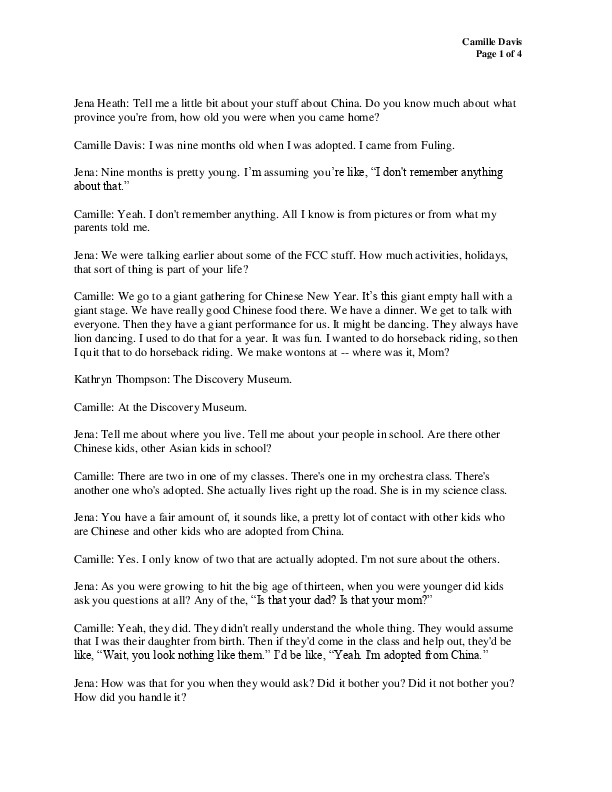 Apr 23, 2019
I grew up in Fairfax, California, population 7,500, during the sixties and seventies. It was an interesting time to be a kid. Fairfax is 20 miles north of San Francisco and these were the decades of peace, love and liberation. It was not a boring childhood.
I was born in 1957, the youngest of four children. By the time they got to me I had more freedom than my brothers and sister. By the time I hit my teens there were so many exciting things that I was exposed to. A Catholic upbringing and experiencing the sixties was a good combination. Grounded and creative.
I've enjoyed drawing for as long as I can remember. In junior and senior high school, I made jewelry and sculpted ceramics. My parents married on my mom's 21st birthday. Dad was almost 20. They encouraged all my artistic passions. My father was a banker and a wood carver. My mom was creative in crafts and drawing. After high school I went to community college and worked. I moved out when I was 19.
When I was 21, I moved to Seattle to do an apprenticeship with an illustrator, knowing only that one person. That didn't pan out as intended, but I stayed seven years and it allowed me grow up away from the safety of home. As an introverted person I began to feel comfortable reaching out and reinventing who I was away from Marin County. I went to two community colleges and eventually to the Art Institute of Seattle. When I graduated I immersed myself in the Graphic Arts field. I had paid for college myself and was motivated to make the most of it. No going back to waiting tables. I did freelance illustration and worked at ad agencies and graphic design firms.
When I was 29 I moved back to Marin with the idea of living at home while saving money to put myself through Art Center College of Design in Pasadena, my dream school. It was hard to live at home again. I needed to make money and move out. I didn’t go to Art Center. I worked many jobs in San Francisco as an independent contractor. Eventually, I bit the bullet and became a full -time freelance illustrator. I was poor and happy. I survived on that for a few years. Then I met my husband.
When I was very young I pictured living on a farm with kids and animals when I was grown up. I had it in the back of my mind that I wanted to adopt. When I was a teenager and through my twenties I could not imagine having kids or getting married. I did, however, picture a life commitment with a man. I was in three long- term living-together relationships. I never wanted marriage or children like two of the three men did.
When I was 34, I went to a meeting to learn about adopting from India - as a single Mom. I didn't have the money to proceed.
I met my husband when I was 36 and he was 38. He lived in my old neighborhood. My parents were a block away. I could actually picture getting married for the first time. After we got married I could picture a family. I didn't think I could get pregnant because I had been lax about birth control and had never gotten pregnant. We checked out IVF and I had viable eggs and I thought: `Wow, I never thought I could get pregnant!` It had not concerned me and then I heard I could. How novel. Okay, lets try this, I thought. My eggs were `viable` and we inched along. By the time I had them checked again it went to `not viable.` I was upset but not horribly so because I didn't spend my life picturing giving birth.
I also never imagined having Rheumatoid Arthritis, but I got it at 31, out of the blue, no family history. I thought all those injections for IVF would weary me since I had an autoimmune disease. The weekend I had to decide about going with an egg donor I got a call from an old friend in Seattle. I hadn't heard from her in eight years. She had adopted from China. In instant, literally, I knew that that was where our daughter was.
As soon as we got home with Grace, I knew we were going back to get another baby girl. Camille is 4 years and 10 months younger than Grace and they get along well. It was a joy for my parents and daughters to see each other
nearly every day until my folks passed on in 2009.
I never had extended family around growing up. I adore my two daughters.
I love what we share as a family. We are about to get a new puppy. Our Golden Retriever, Peach, died last summer and I miss her so much. She was my best friend.
I am thankful for the family I came from and for my two precious daughters and for being able to make art. 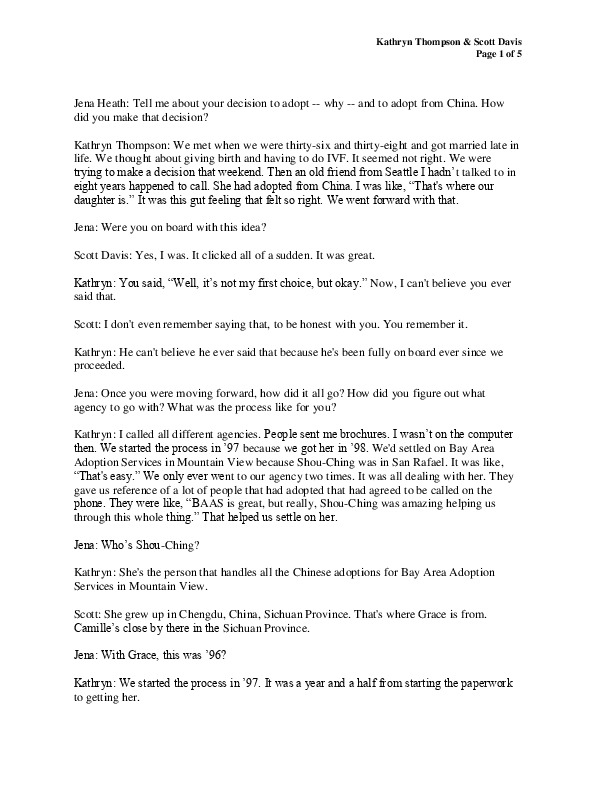 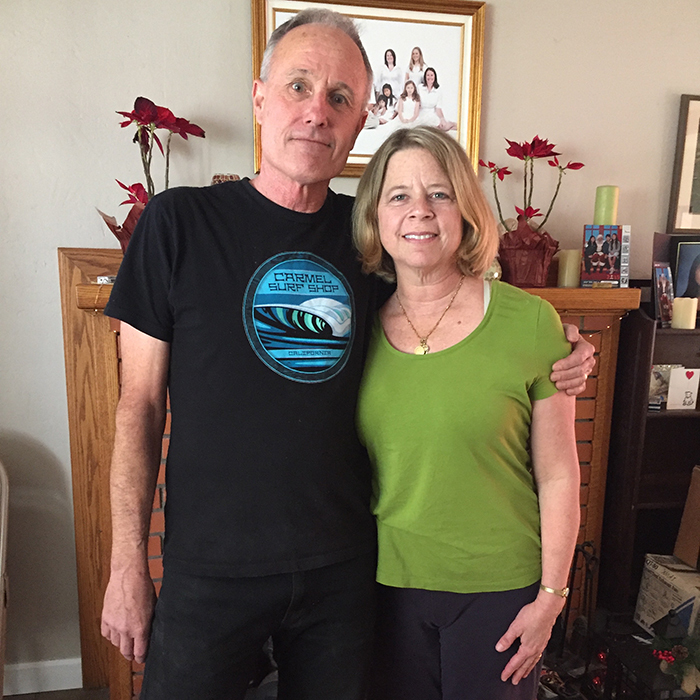 Apr 23, 2019
Hey, I’m Grace Davis.
I’m an 18- year- old trying to make my way through life. I was adopted at the age of 7 months to a loving family here in sunny California.
As a child I grew up knowing I was adopted and I've always embraced that part of me. I’ve had the great opportunity to be a part of non-profit organizations learning about my culture and making friends who have also been adopted. Through the connection of adoption these friends that I have made will last a lifetime.
I will always be grateful for the life I have been given and I hope you enjoy hearing a little more about me with this interview. 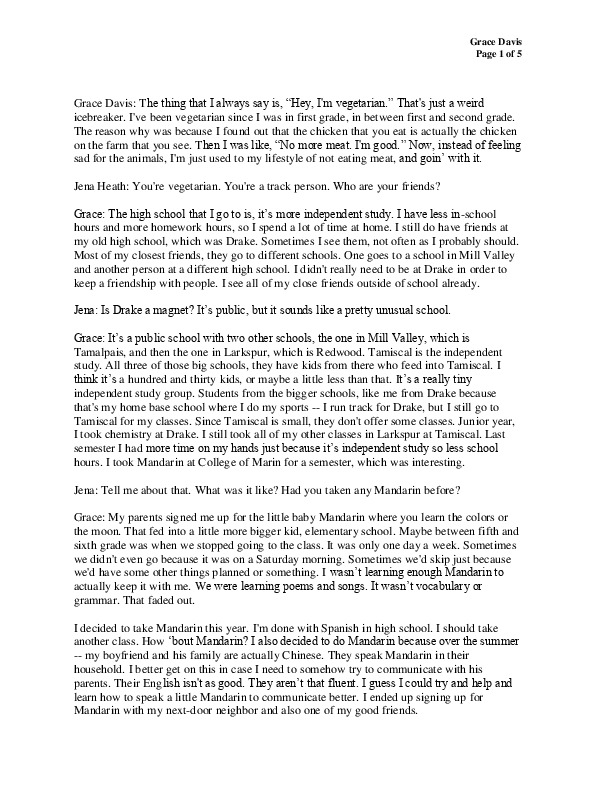 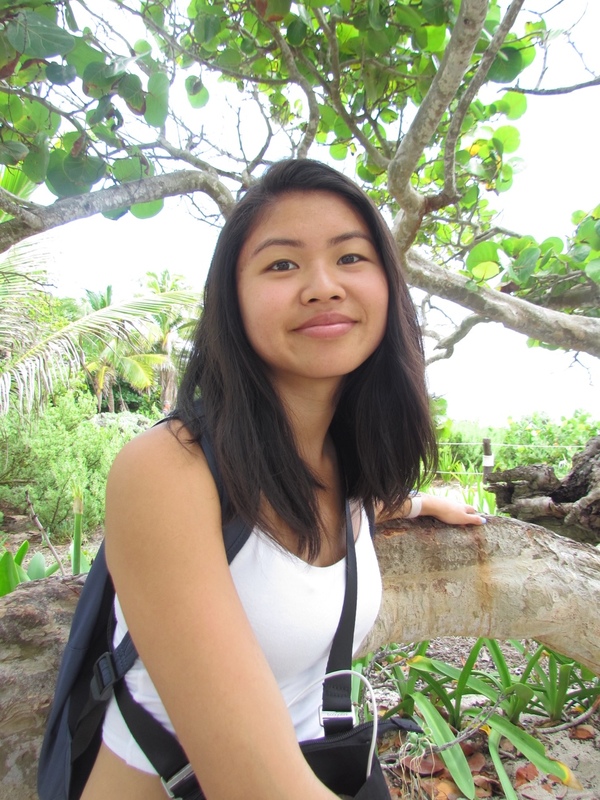